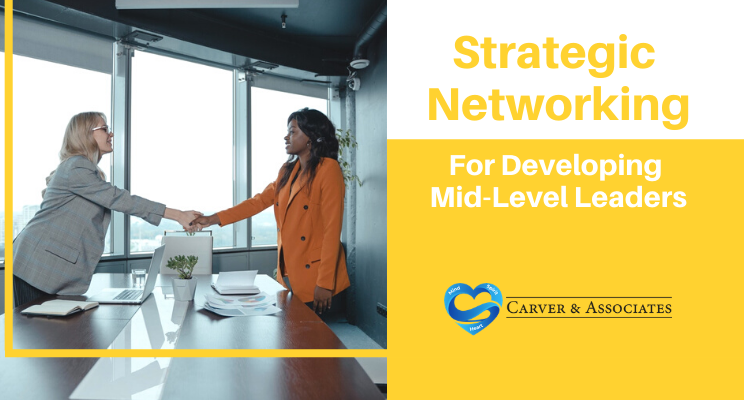 When asked, most mid-level leaders would say that they don’t like networking.  They often equate networking with “schmoozing” or “politicking.”, and often despise it because they believe they are ineffective at it.

There are many limiting beliefs about networking that have led people to abandon the practice, such as:

The Truth of Strategic Networking

The quickest way for leaders to reap the rewards of networking is by first shifting their perspective about the practice. The way successful leaders look at networking is as an avenue for meeting people, sharing ideas, and offering value.

One of the amateur career mistakes in developing your leadership skills is not having a Career Growth Circle congruent with your career goals. Also, not understanding the value of strategic networking. Clarifying and qualifying the people you want to meet is one of the key activities that will improve your development as a leader.

While strategic networking is important to continued career success, it’s even more vital when transitioning to a mid-level or senior manager role.

Strategic networking has also been found to be positively associated with:

After graduating from college, I had an interest in working for a specific global consulting firm. There was an opportunity to attend a public event held by the firm’s client. I registered, researched which employees might attend, and rehearsed my elevator pitch. I attended, gave my introduction, and inquired what I should do to apply for a consulting job. My contact within the firm advised me the best approach would be to email my resume to the General Manager and copy her. I had two months until they would begin interviews.

At the time, I had just learned about a networking technique called the Golden Triangle. The rule of the Golden Triangle is that you are at the top, on the left is an individual with a problem, and on the right is a person that has a solution. Your role is to facilitate an introduction between the two parties.

I recognized that my contact within the consulting firm wanted to meet with school principals because she had a solution to one of their problems. I set a goal to facilitate face-to-face meetings with her and three principals within two months. After that, I would send my resume as she recommended.

After two months, I successfully facilitated two face-to-face meetings, sent my resume off, interviewed for the role, and was hired. After the first year of consulting, I was informed that my initial contact gave a strong endorsement when the hiring team was deciding who would get the last interview slot. I found out that if it wasn’t for her persistent recommendation, they would have likely chosen another candidate.

The interesting thing was that my contact never saw me work with a client in the role of a consultant. However, she endorsed me because I led with value in the relationship. I helped her get what she wanted which were meetings with decision-makers.

Don’t just take my personal story as proof. In research done by DDI on leaders transitioning at all levels, as leaders ascend to more senior levels of leadership, there is an increased importance of networking skills. Additionally, 38% said support in creating a network would have helped the most.

Identify “Who” Can Get You There Faster?

A common networking mistake is that people reach out to steal time without first building rapport and adding value to the relationship. Leaders at the top levels may see this as a lack of preparation on your end.

Ty Miller is a Leadership Strategy Consultant at Carver & Associates. He Helps Leaders Cast A Vision, Align Their Teams To It, And Drive Execution Of That Vision.